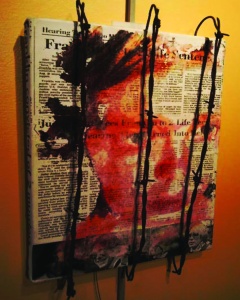 Before he was a monster he was a child, who waited for help. No one came.

Four weeks from now he will be executed.

I truly believe that JPF should be relieved of his suffering. His energy has been nothing but dark, evil and murderous. I equate it to an abused animal that can’t be stopped from killing and harming at will.

I am not seeking revenge. If I sought revenge I would want him to die in prison in his 90’s. I am seeking the mercy for his suffering life.

I think about what happens to our energy when we die. Energy doesn’t die it transforms. His energy is a black hole of hate. How could that be healed? I think of Martin Luther Kings quote, “Darkness cannot drive out darkness. Only Light can do that. Hate cannot drive out hate. Only Love can do that.”

Some people think of God as Light and Love. I am one of them.

Maybe his dark energy could be transformed into light before he dies. I hate to think of his energy binding with more dark energy.

He never knew love. As a child he was brutalized, starved, beaten under the peripheral vision of family members who didn’t help him. “It wasn’t polite conversation. It was none of their business.”

He was a product of the village that turned their eyes to the suffering of an unprotected abused child.

I am not making excuses for him. I can only forgive when I truly hear his narrative.

But knowing how he was raised I understand how he grew up to murder the children in the village. Averting our eyes to the suffering of a child, doesn’t shield us from their pain.

I pray for him.

I pray he is sincere in his apology and renouncing of racism.

I pray for his healing before he dies.

I pray there is a God.

I pray for reincarnation.

I pray he is born to a loving nurturing family and is raised to value love and life.

I pray for the end of child abuse, racism and apathy of the village.

I pray for a TSUNAMI HEALING RIPPLE EFFECT in Humanity.

Child Abuse Casts The Long Shadow Of A Lifetime.

Child Abuse Casts The Long Shadow Of A Lifetime.

Denouncing racism and asking for forgiveness of his victims, is not something I expected to see, even if he is on borrowed time. I am shocked.

Three months ago I went to the canyon and prayed for his sentence to be carried out.

Before then, I never thought about his execution. It seemed so far away. It didn’t seem a real possibility until he was old and gray, which is obviously the case.

An execution seems more humane than his life. I never thought I would pray for someones death. But when I learned more about his childhood I found that he has been in some sort of prison his whole life from cradle to grave.

I wasn’t praying to be vindicated so much as mercy, for who he could have been if he had a normal childhood and upbringing.

His life sentences were connected to the victims & family life sentences. We will all be doing time for the village turning a blind eye to his childhood suffering.

I am not trying to make excuses for him. I want to heal the wounds he left in my heart and the community. In order to do that I have to know his narrative. What I have learned allowed me to forgive him. I think that is why I prayed for his suffering to be eased. Death is the only way that can happen for him.

I created this art piece to remember why its important to be part of the village who watch over our children. I am willing to have uncomfortable conversations if it saves a child.

JPF’s childhood and life reminds me that ignoring someone’s pain doesn’t shield me from it.

© Terry Jackson-Mitchell and http://www.idwellindreams.wordpress.com, 2013. Unauthorized use and/or duplication of this material without express and written permission from this blog’s author and/or owner is strictly prohibited. Excerpts and links may be used, provided that full and clear credit is given to Terry Jackson -Mitchell and http://www.idwellindreams.wordpress.com with appropriate and specific direction to the original content.