Recently I looked for the art piece that helped me heal the hate I had for JPF.

I hung it in my art studio. But it seemed to always be looking down at the space where my grandchildren play, so I moved it.

I usually keep it in a drawer. I didn’t really like looking at it. It was too powerful and painful. Although the intention of healing was tremendous 4 years ago, I felt a heavy weight in my heart when I looked at it.

I searched everywhere and couldn’t find it.

I called my husband he said, “Honey, I think you threw it away.” I was stunned. I couldn’t conceive of throwing it away. How could I throw away this powerful symbol that transformed me and JPF so deeply? I was so disappointed in myself.

My fear and anxiety grew.

For days I was deeply concerned about my mental health. Why couldn’t I remember throwing it away? It didn’t seem like something I would do; throw away meaningful art. I wondered why I wouldn’t sell it rather than discard it? I had offers to purchase it. But I kept it to use in race and ethnicity classes at the community college.

Days of beating myself up and retracing my steps led me to remember what happened:

I had a strong urge to listen to the last of the recorded conversations I had with JPF, the day before his execution. In our conversation, he showered me with compliments, gratitude and love. He seemed genuinely sincere when he  told me how much it meant to him that I would forgive him. He asked that I call his friend Glen Miller, suggesting he would be good to me.

I never called his friend. I may have forgiven JPF but I’m not stupid. I felt strongly that if I visited him,  JPF would have someone waiting in the parking lot at the prison to finish what he started in 1980. That’s why I only spoke to him on the phone. I didn’t trust or like him. I pitied him.

I couldn’t listen to more than a few minutes of our conversation. It was too painful and traumatizing.

I looked up Glen Miller and found several articles including these:

Miller’s murders were committed on JPF’s birthday, the year after his execution. This act of domestic terrorism was mostly ignored by mainstream media. I sincerely believe that ignoring these domestic terrorist’s crimes, helps white supremacy flourish in the shadows.

JPF and Miller’s stories sickened me to my core.

At that moment, I felt that no one, who can do anything about it, cares about healing racism or holding white supremacist domestic terrorists accountable in our country.

Something inside me broke. I walked straight to the garbage and got rid of it, along with the memory of throwing it away.

If only eradicating the ignorance of white supremacy were that easy. 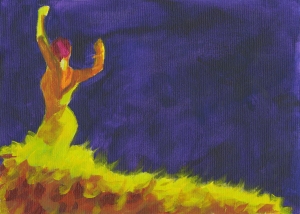 I am healing the trauma of RACE WARS in my dna.

Spring semester 2013, I was asked to create paintings without using any black or white to mix the colors for paint.

I couldn’t help but think, “What would my life be like without black or white’s influence?” I often feel that I walk between the space of race.

I thought of all the races that are part of my DNA. I come from a long line of open-minded lovers, maybe some weren’t given a choice. Many ancestors were on opposite sides of race wars; French, Mexican, German, African American, Native American, Middle Eastern, English, Irish, Scottish, slaves & slave owners.

I thought of the imprint of pain & misunderstanding because of the black & white mentality that cripples my heart when I feel like I don’t fit in.

I wondered if I could heal my ancestor’s pain within me.

I visualized them all, speaking of their lives & their journeys. I wanted to hear them all. I wanted to heal them all. I saw them making peace with each other in another realm where no black or white was allowed, just the pure colors of their essence. They were my inspiration for these paintings.

I see them all dancing within me.

I see them in the face my grandchildren.

Changing the world begins within…. outside of black & white.

I recently watched a couple of documentaries about Bob Marley. I am so glad I did.

For me reggae music has become an acquired taste. But I’m aligned with the energy and message of reggae.

I was in awe of Bob’s story. It’s ironic he died of skin cancer.

Bob was biracial. His mother Jamaican and mostly absent father was English. His fathers family denied him, even when he was at the height of his popularity. It is because of him that most people recognize his fathers last name.

A Jamaican woman he loved said he died of a white disease, skin cancer. Many healers believe if you don’t deal with your feelings they show up in your body as illnesses.

It made me think of the white oppression he experienced in his every day existence. I wish he could have been healed from that damage. He was such a powerhouse for love.

His songs and messages of ONE LOVE are eternal truths that still soothes those that reach towards equality and humanity.